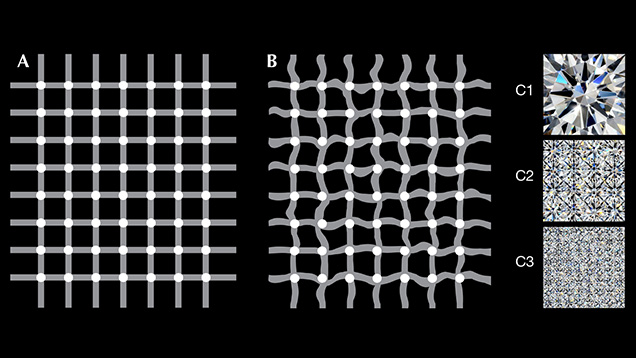 People are impressed with the uniqueness of diamond, which incorporates factors such as brilliance and fire. When the trade commoditized the category through the Four Cs, it was partly due to the technical inability to promote diamond’s impressive optical effects, including optical illusions. This common trade practice inhibited diamond’s competitiveness against other goods in the luxury sector. But from now on, emerging technology will allow demonstration of diamond’s magic on a large scale with fine details.

Modern algorithmic craftsmanship creates the category of high-vibrancy diamonds, referred to here as Hi-Vi: exceptional diamonds with superior consumer benefits such as brilliance, fire, table color, symmetry, and spread, compared to others of the same shape, size, and pavilion color. The triple excellent round, which took centuries for the industry to craft, was the first Hi-Vi diamond.

Diamond vibrancy is a combination of optical effects and illusions. For example, brilliance, fire, scintillation, and spread depend on both objective parameters such as cut design and stone size, as well as subjective aspects of human vision, such as space-temporal sensitivity and stereo perception. Figure 1A demonstrates the scintillating grid illusion: The intersections seem to flicker white and black, generating additional brightness and contrast when the observer’s glance wanders. Distortion of pattern ruins this effect (figure 1B). Certain patterns produce higher perceived brightness. This example is a 2D effect; more astonishing optical illusions result from human stereo vision.

In figure: a scintillation grid (A), a scintillation grid with a wavy pattern (B), and squares covered by round brilliant-cut diamonds in different sizes (C).
The phenomenon of diamond brilliance has a similar origin—human vision peculiarity—as the scintillating grid illusion described above. The impact of optical illusions on both Hi-Vi diamond patterns and jewelry designs (e.g., melee) are to be considered, so Hi-Vi optimization is made for not just single diamond cuts, but also for each diamond jewelry piece as a whole.

Figure 1C shows squares with round brilliant-cut (RBC) patterns that differ only in size. The integral colored and colorless areas are exactly the same, while the perceptions of fire and brilliance in each image are quite different. It is impossible to maximize two performance parameters (both fire and brilliance, for example) simultaneously. The consumer’s final choice should be based on subjective preferences and rely on performance benchmarks.

Hi-Vi diamonds should be demonstrated with an optical performance digital “loupe,” which allows even inexperienced buyers to easily appreciate the performance difference at the highest levels of brilliance, fire, and scintillation. The “loupe” is critically important for mass marketing of relatively small diamonds. For sustainable market development, diamond impressiveness and vibrancy born of masterly designed optical illusions and visual effects is the selling proposition to craft, demonstrate, and explain.

This video is from the Research Track of the 2018 GIA International Gemological Symposium. The Research Track presented the latest findings by Institute researchers and scientists respected across the industry and from around the world.