From the materials of Pricescope Diamond Journal "Lasers used in planning the cutting of diamonds" by Garry Holloway.

All scanners build 3D virtual models by photographing the shadow profile of a rotating gem in front of a light source. But this method misses concavities (see the example in first image). Using the ‘triangulation principle’ a low power visible line (e.g. from a ‘lecture pointer’ type laser beam) is directed onto the rough gemstone from an oblique angle of about 30° to the camera. From the cameras perspective a convex object, like a sphere, shows a line curving away from the center, but the light shines into any concavities or holes, and the camera sees an inward curving line. Software calculates the depth of the concavity and adjusts the 3D model.

OctoNus developed a dual laser cavity mapping system that gets to the bottom of more holes than the single red laser light system as shown in the example below. Two Helium Rough camera views (the first in shadow profile mode) of irregular shaped rough diamonds showing two laser lines (in black and white). Concave distortion in the vertical beams from the two laser beams show the rough has cavities. These cavities are not able to be detected in the shadow edge silhouette. There are two samples with models obtained by different types of scanning in the table below. The detailed descriptions, diagrams and movies are available.

Examples of models obtained by different types of scanning

There are Dual Laser mapping models of coins obtained on Helium Rough 1:4D scanner. You can download and explore .oxg demo files with Oxygen Viewer Free Version and Oxygen Inclusion. 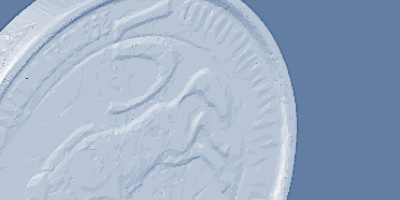