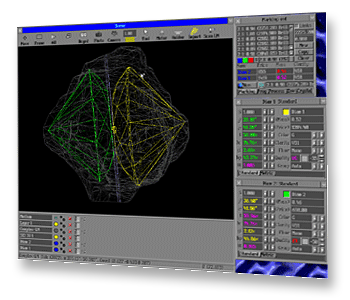 Approbation and Estimation of efficiency of the interactive computer diamond marking system (ICDMS).

Stones having inclusions that make efficient marking complicated and considered non-profitable with the existing visual marking technology and control lots.

The selected stones were of comparatively complicated shape (with various degrees of distortion). The inclusions were located both in peripheral and central zones. The "Cleavage" experimental group contained stones suitable for inscribing a large "Cr-57" diamond. The "Spec Stones" and "Dark Stones" groups consisted of stones similar with respect to both shape and inclusion location.

Mikhail Shcherbakov, an "Askor" expert, marked every stone of the experimental group and predicated the results with the help of traditional technology (mass, color group, quality group, linear parameters were determined). Then the prediction of the characteristics was made with the help of ICDMS, based on the expert’s marking. The optimal location of diamonds was determined with respect to their cost and considering the risk of possible loss. The marked stones were processed on the cutting production of "Askor" in accordance with the existed technology ("sawing"-"bruting"-"cutting"). In addition to the experimental lot, without the preliminary marking, a diamond of the following characteristics was marked with the help of ICDMS: Dark Stones 2col 4ct 4.78 ct.

More correct and precise efficiency coefficients values could be obtained from the table below.

* There were no prognoses on diamond color and the result after cutting was used in diamond valuation.

Due to imperfection of the "Askor" equipment and resulting mistakes in the phases of sawing and stripping, the clarity group and mass characteristics of the diamonds deteriorated, which resulted in diminishing of efficiency ratio on the following stones:

The Spec Flat Shapes 9.49cr stone which was considered non-profitable according to the existent Moscow "Kristall" factory technology was marked in November 1993. The variant was suggested that Marquis 3.09cr be the main diamond. The location of the diamond was chosen that they not contain the largest inclusion of 30-50mcr. This variant turned out to be 20% more cost-efficient than the one of the factory had proposed (2.05cr 6/6 and 2.04cr 6/4). Than the factory ordered a system that would be flexible and capable of further improvements.

The tests arranged on June, those concerning efficiency of the system, were cancelled since no factory expert has doubts about it. We only tested various methods of the work in order to find the most efficient ones for Moscow "Kristall" factory. As for the stones we marked with the system, they were not traced in processing, because they were of less than 3 carats. That is why I take a risk to include a short summary of the factory expert’s opinions: